This ATM at Art Basel has a twist: It posts a picture of you with your bank balance

What if everyone in a room knew your bank balance?

A Brooklyn art collective has created an ATM that lets people put their balance on display at the Art Baselin Miami Beach.

The ATM created by MSCHF puts the cash balance of those who use it on display at the art fairand ranks people by wealth. American DJ and music producer Diploposted on Twitter a video of him taking the No. 1 spot on the ATM at $3 million on Friday.

"ATM Leaderboard is an extremely literal distillation of wealth-flaunting impulses," said Daniel Greenberg, co-founder of MSCHF. "From its conception, we had mentally earmarked this work for a location like Miami Basel, a place where there is a dense concentration of people renting Lamborghinis and wearing Rolexes."

The ATM was sold for $75,000 at Art Basel, Greenberg told NPR. Wherever the ATM crops up next is up to the discretion of the buyer, but top scores on the leaderboard will remain on the ATM after each showing to encourage people to top previous users.

MSCHF collaborated on the ATM with Perrotin, a contemporary art gallery that has also presented quirky pieces like a banana duct-taped to a wall priced at $120,000 in 2019.

MSCHF creates products that often go viral with the help of top influencers.

Kylie Jenner, with over 370 million followers on Instagram as of Dec. 3, shared a photo of a pair of imitation Birkenstock sandals made with leather from Hermès Birkin bags she snagged from MSCHF last year. Lil Nas X partnered with MSCHF to create "Satan Shoes" — an aftermarket Nike sneaker with drops of blood that sold out in under a minute. MSCHF was sued by Nike last year for selling their shoes, which cost $1,018 a pair, unauthorized. 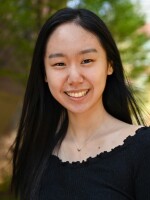 Ashley Ahn
Ashley Ahn is an intern for the Digital News and Graphics desks. She previously covered the rollout of COVID-19 vaccines for CNN's health and medical unit and the trial of Ahmaud Arbery's killers for CNN's Atlanta News Bureau. She also wrote pieces for USA TODAY and served as the Executive Editor of her college's student newspaper, The Daily Pennsylvanian. Recently graduated from the University of Pennsylvania, Ahn is pursuing a master's degree in computer science at Columbia University.
Support for KPCC comes from:
Become a KPCC Sponsor