New York Yankees superstar Aaron Judge has hit his 61st home run in one season, more than any Major League Baseball player in two decades and good enough to tie an American League record set more than six decades ago.

The record-matching hit came from a full-count pitch in the seventh inning of Wednesday's game against the Toronto Blue Jays, soaring over the left-field fence.

Judge's home run ties the enduring AL record, which was set by Yankee Roger Maris back in 1961. The milestone persisted even through baseball's "steroid era" of the late 1990's and early 2000's, when performance-enhancing drugs were common and other home run records fell left and right. (Before this season, the closest any player had come to breaking the AL record was Alex Rodriguez, who hit 57 HRs as a Texas Ranger in 2002. Rodriguez later admitted to using steroids that year.)

In the 61 years since Maris set the record, his mark has been cleared six times by three different players. That includes the all-time single-season record, set at 73 by Barry Bonds in 2001.

But all three — Bonds, Sammy Sosa and Mark McGwire — played in the National League, leaving the record standing open for American League players ever since.

Judge has seemed like a candidate to break the record since the start of his career, when he hit a homer in his first-ever MLB at-bat and became the first rookie to clear 50 HRs. But he struggled with injuries in several seasons afterward.

Now, at 30 years old, Judge is having a resurgence: He has more homers, more hits and more RBIs than any previous season, and his .313 batting average is his highest ever.

Judge has perhaps 26 more trips to the plate to break the record. The Yankees have seven games left to play before the regular season ends early next month. 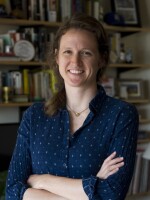 Becky Sullivan
Becky Sullivan has reported and produced for NPR since 2011 with a focus on hard news and breaking stories. She has been on the ground to cover natural disasters, disease outbreaks, elections and protests, delivering stories to both broadcast and digital platforms.
Support for KPCC comes from:
Become a KPCC Sponsor