Most crosswalks look the same: white stripes on the street, signals on either side telling you when to walk.

But a new crosswalk in the Miracle Mile area-- the first of its kind in the city of Los Angeles-- has a different design aimed at improving safety for one street in the city where 127 pedestrians were killed last year.

6th Street near LACMA and the La Brea Tar Pits is a busy road that gets a lot of foot traffic.

"It needs something a little more visible than just a marked crosswalk," says Seleta Reynolds, General Manager of L.A.'s Department of Transportation.

Enter the "High Intensity Activated Crosswalk"-- or HAWK signal. It has lights on either side of the road and on arm that goes over the street, alerting drivers when someone is crossing.

"It looks very much like a full traffic signal, that connection in driver's minds really does draw their attention," says Dan Gelinne, a senior researcher at the University of North Carolina's Highway Safety Research Center. He says HAWK signals are made for crosswalks in the middle of a block, like the one on 6th Street. 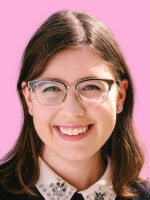 Emily Henderson
My job is to deliver up-to-date coverage of the day’s biggest stories.
See stories by Emily Henderson
Support for KPCC comes from:
Become a KPCC Sponsor