Oscars 2018: Change is clearly in the air in Hollywood

Sometimes change comes so slowly it’s almost impossible to notice. But the second I stepped onto the red carpet at Sunday night’s 90th Academy Awards, it was easy to spot how quickly the Oscars have evolved.

The array of awards presenters, nominees and winners has for decades looked nothing like the country or the world: The Academy Awards have been dominated by white men. But last night, the ceremony was populated by women, people of color and from underrepresented groups. And they were celebrated loudly. Much of the biggest applause along the red carpet went to the black men and women from the cast of “Black Panther,” which could be a player at next year’s Academy Awards.

And it wasn’t simply who was in attendance: among the people either not invited or unwilling to attend were four men linked to purported sexual abuse and harassment: Harvey Weinstein, James Franco, Kevin Spacey and Casey Affleck. What’s more, only a smattering of prominent female nominees and presenters stopped to talk with Ryan Seacrest, from “E! Live From the Red Carpet,” because he, too, is facing allegations of sexual harassment.

Once the show began, the Time's Up and Me Too movements were as prominent across the evening as was best picture and director winner “The Shape of Water.” From where I sat, the most emotional moment of the ceremony had nothing to do with a winning film or nominated song performance. Instead, it was when alleged Weinstein victims Ashley Judd, Annabella Sciorra and Salma Hayek took the stage to talk about Hollywood’s treatment of women and minorities. Mira Sorvino was prominently featured in a video montage the three actresses introduced — a notable inclusion as Sorvino’s career was essentially killed when she reportedly wouldn’t indulge Weinstein’s predatory behavior.

Ultimately, Oscar voters didn’t make a lot of history with the films and filmmakers they honored. Yes, Mexican writer-director Del Toro won the top two filmmaker awards: directing and best picture. And African-American filmmaker Jordan Peele won the original screenplay Oscar for “Get Out.” Plus, Chile's "A Fantastic Woman," about a trans woman played by trans actress Daniela Vega, was picked as best foreign language film.

But Rachel Morrison, the first woman ever nominated for cinematography, didn’t win a statuette for shooting “Mudbound.” (The trophy went to Roger Deakins for “Blade Runner 2049.”) Yance Ford, the trans filmmaker behind ”Strong Island,” lost in the documentary feature category to Bryan Fogel’s “Icarus.” And “Lady Bird’s” Greta Gerwig, one of only five women ever nominated for directing a feature, watched as del Toro took home that statue.

Among the presenters and winners, there were frequent and impassioned calls for action. Frances McDormand, who was awarded the best actress Oscar for “Three Billboards Outside Ebbing, Missouri,” ended her acceptance speech by pushing for an “inclusion rider,” a contractual term that could help bring about male-female parity in movie crews and casts. I asked McDormand at an Oscar after-party what number she’d like to reach with such a clause, and she laughed and said, “Fifty-fifty, of course.”

Even if the optics looked different on Sunday, real and meaningful change will not come easily or quickly. White men in the business have said for months that they are listening to what women and people from unrepresented groups have been spotlighting. But only until those men alter their biased hiring preferences will the statistics move.

As McDormand said in her acceptance speech: “Look around, ladies and gentlemen, because we all have stories to tell and projects we need financed. Don’t talk to us about it at the parties tonight; invite us into your office in a couple days — or you can come to ours, whichever suits you best — and we’ll tell you all about them.”

Find the complete list of winners here, including links to interviews on The Frame. 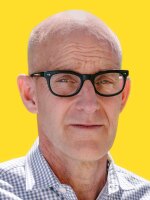 John Horn
I have covered the movie business for most of my professional life, and if that sounds like non-stop fun you’ve never watched “Battlefield Earth” or been yelled at by Scott Rudin.
See stories by John Horn
Support for LAist comes from:
Become an LAist Sponsor