Firefighters battling the Skirball and Creek blazes will have some new help in the skies.

The unmanned aerial vehicles will assess property damage and "locate hot spots, and then we’ll dispatch out firefighters to put final extinguishment in that area," the chief said.

Firefighters flew drones for about 30 minutes Thursday over the Skirball fire, in an area at the north end of Moraga Drive, according to the department's Instagram page. It said this was the first time it used drones "in an operational environment."

An L.A. firefighter launching a drone at the Skirball fire.

On Friday morning, Chief Terraza's spoke with Take Two about how the flight went.

"There were two flights. One of them was just for a visual image from the sky to get an idea of the amount of property damage from the air," said Terrazas, "The second purpose was to locate hot spots, where the fire is still smoldering. Once we have that information, we can dispatch our firefighters to those exact locations."

Chief Terrazas also explained that because using drones is cost-effective, we can expect to see more of them in the future. "We're going to be able to eliminate the need to rent an infrared camera and then fly in our helicopters over the fires...it's going to be a significant saving by using these drones."

The ACLU has expressed privacy concerns, but the L.A. City Council last month approved drone  guidelines for the fire department, which include rules prohibiting public surveillance.

Terrazas also pointed out that, for safety reasons, drones will not be flown at the same time as other firefighting aircraft. 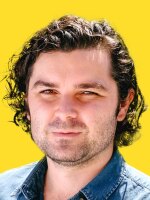