"People love the experience of walking downtown," said Francie Stefan, mobility manager for the city of Santa Monica. "It's particularly interesting how people love the sense of surprise and delight in running into new people and experiencing new things, whether it's stumbling into the farmer's market or a performer. We wanted to celebrate how wonderful it is by creating another moment of surprise and delight."

The city has issued an open call for proposals, with July 30 as the deadline. Officials also released an online survey where Santa Monica residents and visitors can suggest ideas for the display, based on what they enjoy about walking downtown.

The winning designers will be able to cast their vision onto Second Street and Arizona Avenue as well as Ocean Avenue and Broadway, crossings that generally see more pedestrians than vehicle traffic.

They're also two of 11 Santa Monica intersections slated to become "scrambles," where pedestrians will be able to cross in all directions, including diagonally, at the green light. Those scrambles were planned as part of the city's larger effort to reduce pedestrian deaths.

"Creative Crosswalks" has already received an enthusiastic response. As of Friday afternoon, Stefan said, the city had received about 15 proposals from designers (the call for submissions was posted Thursday) and about 150 responses to the survey, combined with input they had already culled from workshops and conversations with members of the community.

Other spots in L.A. County have implemented similar splashes of creativity onto their own streets. Both West Hollywood and Long Beach previously debuted rainbow-painted crosswalks in celebration of LGBT culture.

For now, it's just a pilot project — the art will only be in place for six to 12 months — but the public response may lead to a permanent art installation. 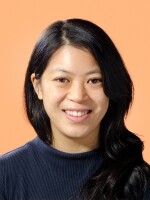 Brianna Lee
I build relationships with people who have a stake in our reporting, and find creative new ways to reach our audiences.
See stories by Brianna Lee
Support for KPCC comes from:
Become a KPCC Sponsor