Huell Howser is reportedly retiring, without a big announcement. There's a nice collection of videos and appreciations on LA Observed, and I'm reposting our long segment with him, from the glorious day he let us tag along as he taped a whole show around a single food item. Huell, we love you and you'll be missed.

When we explain Off-Ramp to people, they often say, "Oh, it's like Huell Howser, but on the radio!" We take it as a compliment, and were delighted when Huell, whose home base is KCET public television, asked Off-Ramp to spend the day with him.

The impetus for the Huell Howser/Off-Ramp tour of L.A. was National Donut Day, a celebration of what might be L.A.'s favorite food. We started at the Salvation Army's kitchen at the VA campus in West L.A., where they made donuts the way the Doughboys liked them in World War I — cakey and substantial. Then, it was off to India's Sweets and Spices in Glendale for some vada, which is a delicious savory donut. Finally, to East L.A. for churros, one of the most delicious confections in the world ... when they're hot.

Here's what I learned about Huell:

• Huell is truly curious about everything, but what he likes is to learn, meaning he's not sitting at his home in the high desert, or his place in Palm Springs, or his pad in L.A. reading more about donuts right now and trying out recipes. He's off to the next thing.

• Huell is very sensitive about his accent. He says, rightly, that it's ridiculous to think someone doing shows about California shouldn't have a Tennessee accent, when the whole idea of California is that it's a wonderful melting pot of cultures. "Should I have a Filipino accent? An Armenian accent?" He also says that Southerners are the last allowable target of jokes, and he's probably right about that, too.

• Huell loves his fans but he does not like taking photos with them when those photos are going to wind up on Facebook among a million other photos. Photos are a reflex now, and what takes one minute for one of his fans equals easily half-an-hour a day (or more) for Huell when he's out in public.

• Huell thinks much of TV is too fussy, and that over-elaborate production is taking the spontaneity out of it. He uses 99 percent of what his cameraman, Cameron Mitchell, shoots. He sets up the shots ahead of time, lets the subject know roughly what he'll be asking, then bulls forward with simple intros and transitions. (I personally think there's a middle ground, which is what you hear in Off-Ramp. We do plenty of post-production, but only when needed.) It accomplishes two things: Stuff happens in his segments, and people feel at ease to discuss things and tell stories because the set-up and interview is simple; and Huell is able to cover an enormous amount of ground. Go to his Web site and check out the stuff they've done in 20 years, and you'll find yourself saying, "That's amazing."

Yes, it’s easy to make fun of his accent and his boundless enthusiasm, and the way he talks to his cameraman. But over 20 years of California’s Gold and all the spinoffs, he’s has given voice to thousands of California citizens and has been the conduit for teaching volumes of California history. And for that, Huell Howser truly is California’s gold.

Now, to see how Huell plays on commercial TV, check out this video of an extended gag played on a local Sacramento reporter who did Huell Howser imitations. I love how Huell just takes over the set when he ultimately joins the show in progress. 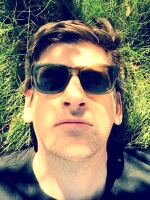 John Rabe
John Rabe is KPCC and LAist's Production & Promotions Director, a post he assumed in July of 2017 after 35 years behind the mike. His job is to shape the sound of the station.
See stories by John Rabe
Support for KPCC comes from:
Become a KPCC Sponsor