Many Catholics were strong supporters of Prop 8.

The Knights of Columbus, for example, contributed more than a million dollars to help get the measure passed.

There was no mention of Prop 8 at the noon mass downtown at the Cathedral of Our Lady of the Angels. Many parishioners were wary of mixing worship with politics.

The Knights of Columbus did not return multiple phone calls for comment.

The L.A. Archdiocese pointed to a statement on the website of the California Catholic Conference.

Bishop Wilkerson, the conference president, expressed disappointment over the ruling, but added that he’s praying the courts will eventually uphold the will of the voters. 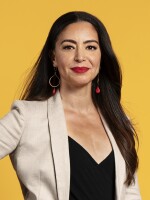 Shereen Marisol Meraji
Shereen Marisol Meraji is the co-host and senior producer of NPR's Code Switch podcast. She didn't grow up listening to public radio in the back seat of her parent's car. She grew up in a Puerto Rican and Iranian home where no one spoke in hushed tones, and where the rhythms and cadences of life inspired her story pitches and storytelling style. She's an award-winning journalist and founding member of the pre-eminent podcast about race and identity in America, NPR's Code Switch. When she's not telling stories that help us better understand the people we share this planet with, she's dancing salsa, baking brownies or kicking around a soccer ball.
Support for KPCC comes from:
Become a KPCC Sponsor