Before going on Thanksgiving holiday, President Biden announced he will release 50 million barrels of oil from strategic reserves to address a big concern on Americans' minds.

Well, just over the border, a powerful industry group has tapped the strategic reserves of a different kind of liquid gold.

NORMANDIN: We will have take about half of all the inventory.

CORNISH: Quebec makes nearly 70% of the world's maple syrup. The U.S. is actually the biggest client for the sweet stuff. Now, since this past spring was shorter and warmer, producers couldn't harvest enough to keep up with demand.

SHAPIRO: Normandin says only Mother Nature can decide how next season goes. But just in case, the organization plans to add 7 million taps to maple trees.

CORNISH: So go ahead - glaze that turkey with Canadian liquid gold this holiday weekend. Transcript provided by NPR, Copyright NPR. 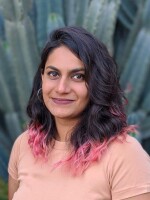 Jonaki Mehta
Jonaki Mehta is a producer for All Things Considered. Before ATC, she worked at Neon Hum Media where she produced a documentary series and talk show. Prior to that, Mehta was a producer at Member station KPCC and director/associate producer at Marketplace Morning Report, where she helped shape the morning's business news.